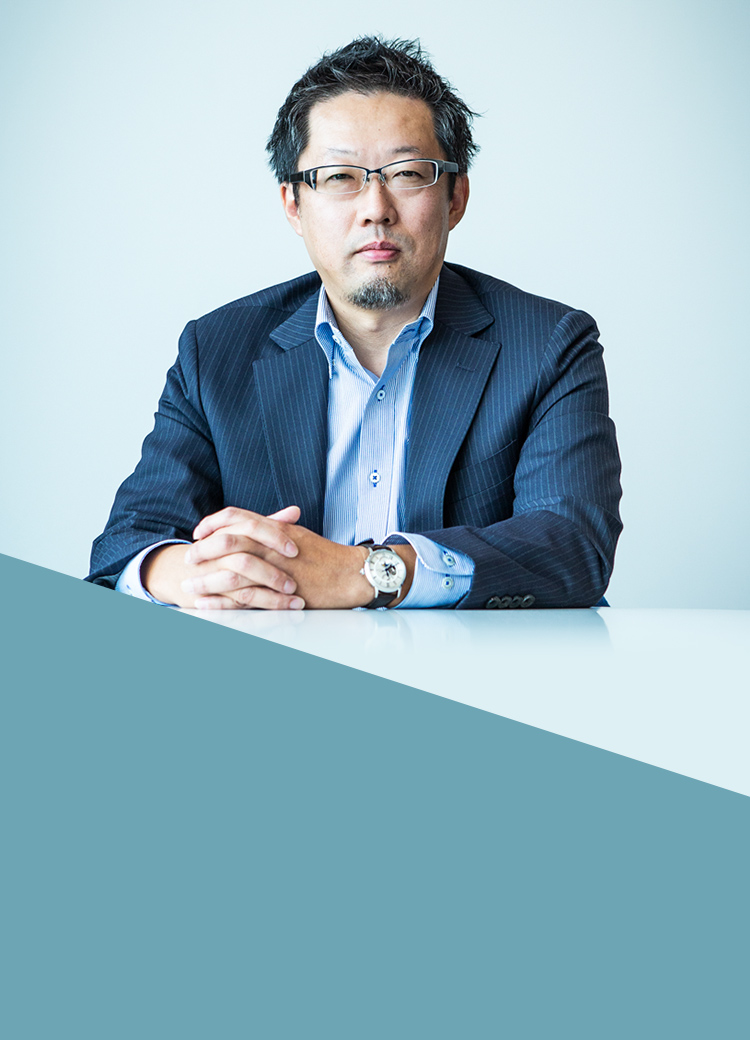 “ORIENT’s distinctive style and strengths come from its characteristic designs and unconventional coloring, and from the pursuit of interesting themes.”

Kazushi Yoshida, the WP Strategy Planning Department general manager at Seiko Epson’s Wearable Products Operations Division, which has such brands as TRUME and ORIENT, is the commander of the department. Yoshida, who was working for another company, joined Seiko Epson attracted by ORIENT timepieces. Since that time, he has renewed ORIENT from products to sales strategies, and in July 2019 he was appointed deputy general administrative manager of the Sales & Marketing Division and general manager of the Wearable Products Operating Division’s WP Strategy Planning Department.

Orient Watch, which was founded in 1950, experienced a difficult period from the 1990s. Seiko Epson came to the rescue after Orient Watch cancelled its listing in 2003.

In 2009, Seiko Epson made Orient Watch into a wholly-owned subsidiary. Then, to manifest further synergy, Orient Watch was merged into Seiko Epson in 2017. Since that time, great changes have been instituted by employees who had been with Orient Watch from the past together with staff newly added from Seiko Epson. We asked them to speak about ORIENT’s “today” and about its future.

Honestly speaking, I think there was a time when ORIENT was confused about what direction to pursue,” says Kazushi Yoshida, who serves as deputy general administrative manager of Seiko Epson’s Sales & Marketing Division. Yoshida, who previously worked in overseas business development and marketing for another company, says he was looking at ORIENT from the outside and thinking “Why can’t ORIENT develop by leveraging its own strengths?” It was right around that time that he was recruited by Seiko Epson. Yoshida had no doubts.

After he joined Seiko Epson in 2018, he intentionally implemented actions which he had previously thought would be threatening if attempted by ORIENT. “I felt that distinctive design and unconventional coloring, and the pursuit of interesting themes are the hallmarks and strengths of ORIENT.” Through repeated discussions, Yoshida and ORIENT’s development team set new directions for ORIENT and ORIENT STAR; ORIENT was to focus on revival of past assets, while ORIENT STAR was to show the future of mechanical watches. Yoshida had the staff revise all the ongoing plans to focus on distinctive ORIENT products.

They also greatly improved product quality. Yoshida says, “In the past the Suwa Seikosha (the present Seiko Epson) manufactured extremely high-precision mechanical movements. Using that technology, we first set out to improve the mainline caliber 46 series movement. Then, on top of that, we could provide plus alpha, such as skeleton design and moon phase display.”

The caliber 46 series movement released in 1971 was a self-winding movement with superior winding efficiency and robust design, but in 2017, there was no way to hide how the design had become outdated. It was Masashi Takano of the Wearable Products Operations Division WP Development & Design Department who worked on the improvements.

“More than ORIENT, it was Epson that had stricter standards for the movement. For example, the clearance between the wheels and the movement was relatively large under the former ORIENT and smaller under Epson. Epson was also strict about in-consistency in parts. The improvement of the caliber 46 series movement was not just in design, but implemented through revision of manufacturing processes.”

Takano explains how reliable watch functions and accuracy were essential. Once that was achieved, it became possible to work at skeleton and other design efforts. “The old caliber 46 series and the caliber 46 series today have the same barrel, third wheel, escape wheel, pallet fork, and balance wheel, but the other parts are entirely different. The movement was made thinner by using a thinner fourth wheel and main plate. Also, the positioning of pins inserted into the main plate was changed to suit skeleton models.” Takano says.

Since that time, ORIENT STAR has been able to make the skeleton models more replete. It was Satoshi Ishiguro of the WP Strategy Planning Department who formed the direction for ORIENT together with Yoshida. Ishiguro explains. “ORIENT’s design has the spirit of embracing challenges. The Multi Year Calendar released in 1965 is an excellent example. ORIENT’s spirit is to incorporate design and coloring that others would not attempt into its products.”

ORIENT has countless assets from the past. Among those, we want to adopt the items that are suitable for the present times.

The people who support the rebirth of ORIENT: from the right to left, Daisuke Tanabe of the Wearable Products Operations Division WP Strategy Planning Department, who has overall responsibility for the products; Satoshi Ishiguro, a manager of the WP Strategy Planning Department who determines ORIENT’s direction together with the WP Strategy Planning Department general manager, Kazushi Yoshida; Masashi Takano of the WP Development & Design Department, who renovated the caliber 46 series movement which was originally developed in 1971. Takano incorporated Seiko Epson’s stricter standards and further improved the reliability and accuracy of the caliber 46 series movement. At ORIENT, the design works are led by designers Kohei Tomishita and Katsunori Kume. They bear the grave responsibility of carrying forward the past assets which are ORIENT’s pride and fitting them to contemporary times.

In 2018, the foundation was set for revisiting and reviving ORIENT’s heritage, centered on the 1960s and 1970s. Ishiguro says this was the work of returning to ORIENT’s originality. The first product released was the WEEKLY AUTO ORIENT KING DIVER.

Katsunori Kume, who worked on the design, explains. “We wanted to make a diver’s watch that retained the original form and feel. We gave the hands a new design and also created a new wristband, but since we aimed to return to the design of that time, we traced the day font from the original. Yet we wanted to keep the price below $500 so the watch could be used by many people.” The adoption of crystal glass rather than sapphire crystal was also to keep the price down. Regardless, the watch incorporates refined craftsmanship that perfectly expresses the ORIENT of today, and does not feel as if it is affordable.

Meanwhile, ORIENT also released models that are more distinctive to the ORIENT brand. These were the Retro Future reproduction series released in 2005. The original models were brimming with playfulness, but the designer Kohei Tomishita says he wanted the reproduction models to incorporate more mechanical rangefinder camera details. This is an ambitious design that could only be adopted by ORIENT.

“We held an in-house design contest, and the camera design was selected. This model was so distinctively ORIENT. We chose a semi-skeleton design to elicit interest in mechanical watches. But we achieved this without losing visibility and also keeping the price affordable. We feel it is important to retain ORIENT’s stance that watches, even entry level watches, can be used every day.” says Tomishita. The designers unanimously stressed the wealth of the assets held by ORIENT. Tomishita continues, “Even among diver’s watches, there are good assets such as the old CALENDAR AUTO ORIENT. There are countless motifs we would like to use, and we will adopt those that meet today’s needs.”

Among such assets, the ORIENT designers paid special attention to the Jaguar Focus with its color gradations. The dial color is highlighted by placing another color around the periphery. While this has become particular popular today, the forerunner to this approach was, without a doubt, the ORIENT of the 1970s.

At one time, ORIENT released a countless number of Focus (gradation) dials. As a result, “there is a mountain of old samples,” says Tomishita. The company is aiming at ORIENT color watches that are always ahead of the color game, as celebrated in the past. Ishiguro adds, “ORIENT is a manufacturer which excels at standard pieces as well. Focus dials are effective to enhance its market presence.” 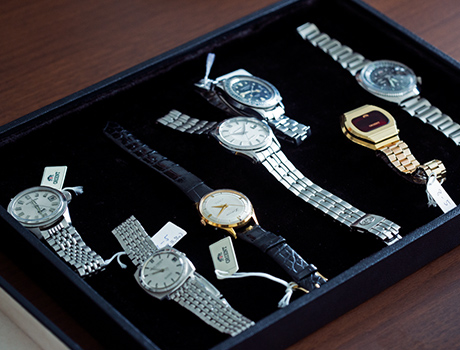 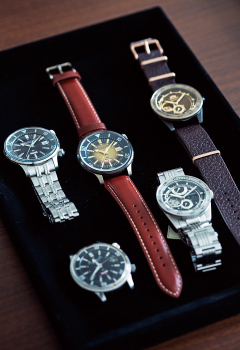 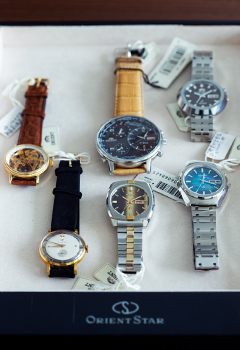 ORIENT has come to make great use of its past assets. Several nostalgic historical timepieces were collected for the joint interview with the development team. From the 1960s through the 1970s, ORIENT worked to differentiate from its competitors with a wide and varied collection. The models on the bottom-left of the picture are reproduction models released in 2020. They are all filled with elements that are distinctively ORIENT.

Since 2018, ORIENT has focused on design and unique functions. This is also clear from the comments “mediocre design is unacceptable” and “don’t aim for the mass.” On the other hand, ORIENT absolutely does not forget aspect as a manufacturer of dependable, practical watches. This is proved by how the new ORIENT began from improving the caliber 46 series movement. One reason why ORIENT, which is called a maverick, has received such wide support overseas is its solid manufacturing.

Daisuke Tanabe of the WP Strategy Planning Department explains. “ORIENT is a global brand. For that reason, ORIENT must hold fast to its standards for watches. Based on that, we seek to expand design and appeal to the public.” This effort to revise ORIENT products as practical watches runs down to the fine details. The minute hand on the caliber 46 series F7 is one example. According to Kume, “We extended the length of the minute hand on the ORIENT STAR to 16mm. This was to secure visibility.” Watchmakers normally do not like to extend hand length because that requires torque. But ORIENT boldly moved ahead with this change.

Yoshida says, “We want to further increase the accuracy of the low beat mechanical movement. Seiko Epson has a history of submitting products to the Swiss observatory chronometer competition and dominating the top ranks, and technologies accumulated. Wouldn’t it be interesting to incorporate such technologies into mechanical watches? We also want to highlight how the ORIENT STAR is made in Japan, and made in Akita."

ORIENT’s creative team declares that half-way measures are dull and that they want to make watches they like. That sense of speed is just like the ORIENT of the 1960s and 1970s, which they are reviewing. The confusion of the past is over, and ORIENT has finally been resurrected.