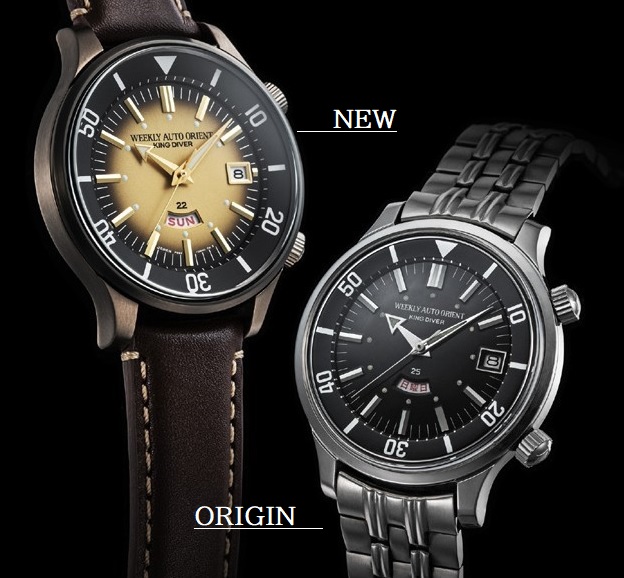 Nostalgic pieces revived from the archives

Orient Watch Company merged with Seiko Epson in 2017. Since that time, ORIENT has been actively using its past archive while maintaining its positioning of providing affordable models.
One representative example is the WEEKLY AUTO ORIENT KING DIVER, which has been reproduced for the 70th anniversary of the ORIENT brand.

*These are not full-fledged diver’s watches that conform to ISO standards.

(Left)
WEEKLY AUTO ORIENT KING DIVER
RA-AA0D04G. Diver style watch that is a reproduction of the original King Diver model released in 1965. This 70th anniversary limited edition adopts the “Jaguar Focus,” which symbolizes the ORIENT brand, for its dial. The water-resistance properties have been enhanced, but this is not a diver’s watch under the ISO standards. Self-winding (Cal. F6922). 22 jewels. 21,600 vibrations/hour. Power reserve: approx. 40 hours. SS (diameter 43.8 mm, thickness 14 mm). Water resistance: 20 bar. Limited edition of 2,700 worldwide. The price of equivalent model in Japan is ¥45,000. 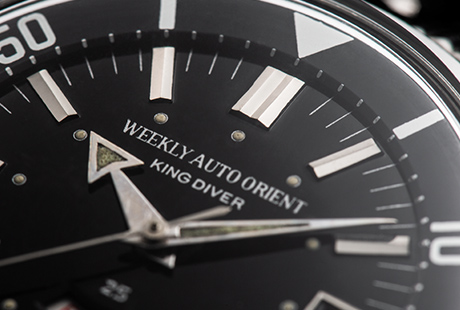 The original model of the WEEKLY AUTO ORIENT KING DIVER, which was manufactured from 1965 through 1969, adopted arrow hands coated with luminous paint. The three-dimensional indexes are embossed. 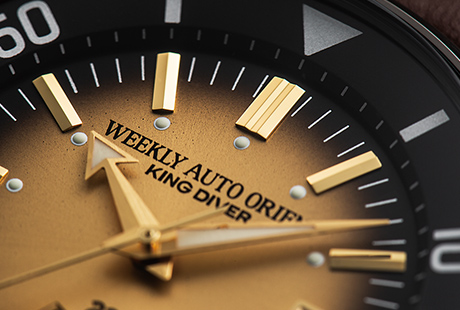 The reproduction models released in 2020 come with four types of dials. The model shown here has the Jaguar Focus dial with gold and black gradations. The indexes have been changed to a diamond-cut applied type, and the hands are diamond cut on two faces. 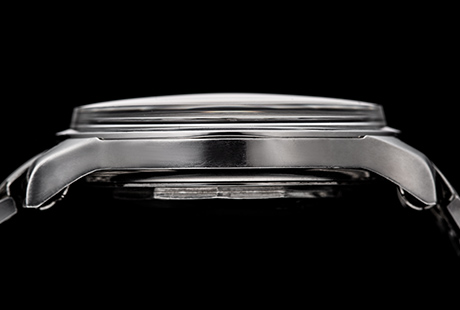 Because the self-winding movement has a diameter of 30 mm, the case is large with a diameter of 43 mm. For that reason, the lugs are bent downwards to improve the fit when the watch is worn. It has a compressor like case, but the case back is a standard screw back type. 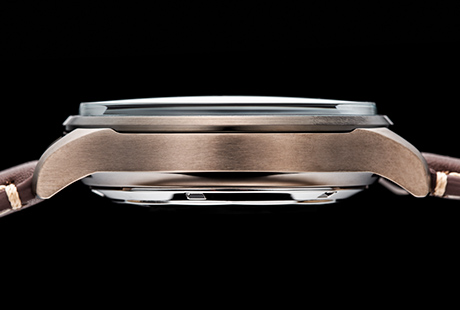 The case has been reformed to a more contemporary shape. The lugs have been made shorter, improving the handling.

The WEEKLY AUTO ORIENT KING
DIVER released in 1965 was a diver’s watch which added a compressor-case-style water-resistant case, which was popular at that time, to a high-winding-efficiency ratchet self-winding mechanism. The watch featured an inner rotating bezel operated by a crown at 2 o’clock. ORIENT adopted this mechanism, which had only been used by certain Swiss watchmakers, for its second diver’s watch. Taking on such new challenges was typical of ORIENT. The case structure was a standard screw back case. However, the water-resistance properties were enhanced with the case size expanded from the CALENDAR AUTO ORIENT SWIMMER, which was like a junior version of this watch, and a thicker water-resistance gasket.

This watch became a collector’s item because of its stylish design reminiscent of Swiss diver’s watches and the unique day display at 6 o’clock. Because the case diameter was large at 43 mm, ORIENT subsequently added smaller models with standard external rotating bezels and hand-winding models.

The development team, which was seeking what is distinct to the ORIENT brand, “dis- covered” the WEEKLY AUTO ORIENT KING DIVER from the past archive and released a reproduction model in 2020, which marked the 70th anniversary of the ORIENT brand. The team aimed at making the reproduction as faithful as possible. They traced the original font of the day display and adopted fonts as close as possible to the original for the other typefaces as well. The box-type crystal was also approximated using crystal glass. Similar efforts were made for the bracelet. The developers reproduced a bracelet close to the original just for this model.

What is more, ORIENT greatly improved the details of this watch. The water resistance was increased from 40m to 200m, and the bracelet changed from a folded link bracelet to a durable solid link bracelet. The hands are diamond cut on two faces, and the looseness of the crowns is completely eliminated. The embossed indexes are changed to applied indexes that are separate parts. In short, the WEEKLY AUTO ORIENT KING DIVER has been evolved into a high-quality diver’s watch, while following the past design.

The models are all attractive, but the one that particularly appeals to ORIENT enthusiasts is the limited edition with its color gradation dial. While popular today, ORIENT adopted a colorful gradation dial, which it named “Jaguar Focus,” from the 1970s. That dial was chosen for the limited-edition WEEKLY AUTO ORIENT KING DIVER, adding a more symbolic color to this ORIENT icon.

ORIENT, which is celebrating its 70th anniversary, is a brand with reliable craftsmanship which has begun actively perusing its past archive. Beyond that, ORIENT has retained the fine points of its past. The WEEKLY AUTO ORIENT KING DIVER incorporates all of these contents, but the price is just ¥45,000 in Japan. ORIENT’s affordable pricing remains unchanged, even in this attractive newest diver’s watch. 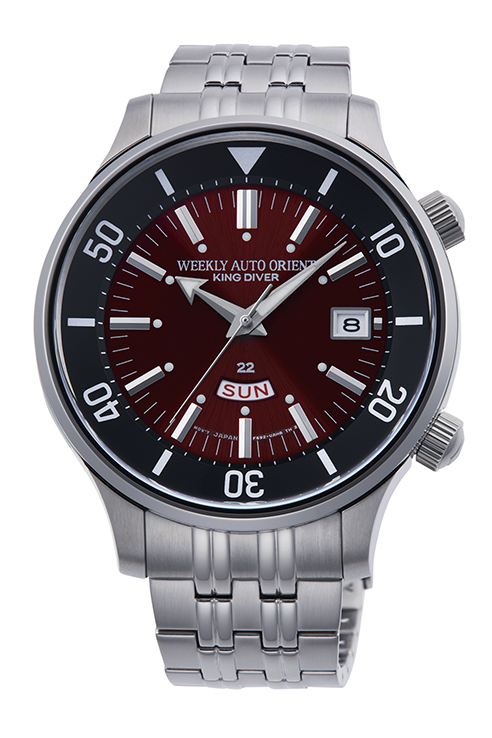 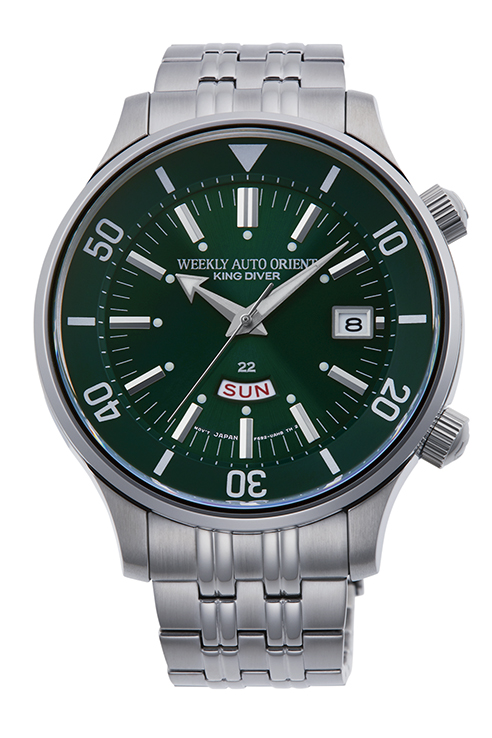 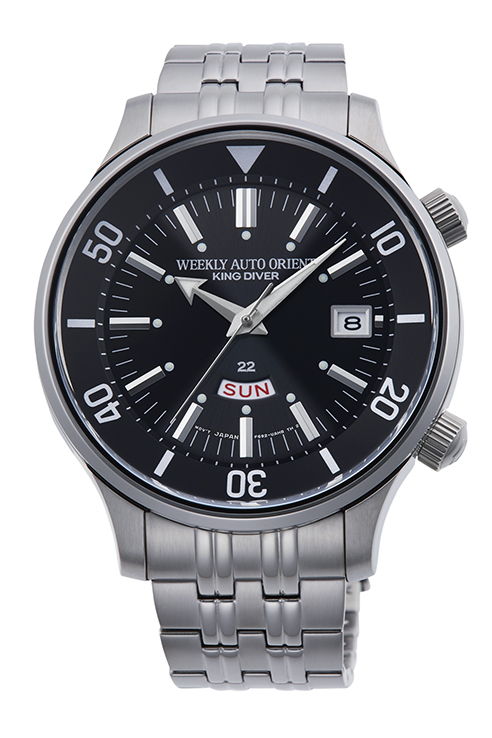 The WEEKLY AUTO ORIENT KING
DIVER was released to celebrate the 70th anniversary of the ORIENT brand. While maintaining the original design, the contents have been greatly upgraded including 20 bar water resistance and a solid-link bracelet. The watch comes with four types of dials: the color gradation Jaguar Focus dial (RA-AA0D04G, limited edition of 2,700 worldwide), the original design black dial (RA- AA0D01B), and the new colors green dial (RA-AA0D03E), and red dial (RA- AA0D02R). The price of equivalent model in Japan is ¥45,000.