This year marks the 70th anniversary of the release of the Orient Star, a mechanical watch combining both functionality and aesthetic appeal. In tribute to the original timepiece, Orient Star unveils a new movement utilizing technology never seen before in the Orient Star line. This unique craftsmanship is sure to capture the attention of watch enthusiasts all around the world.

History of the Orient Star 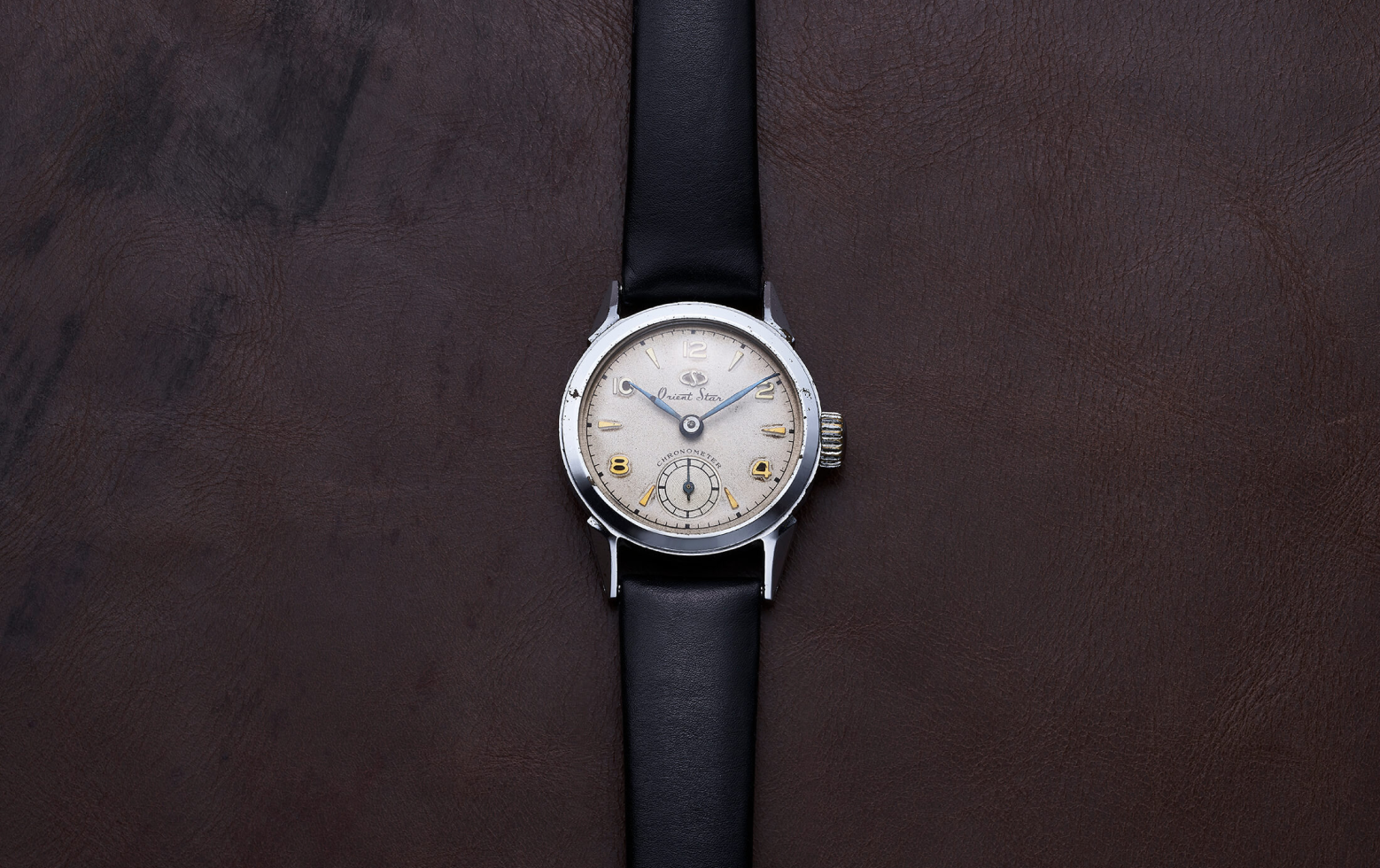 In the year 1950, a watchmaking company was founded in Hino, Tokyo. Just one year later, in 1951, this company was rechristened the Orient Watch Co., Ltd., and in the same year the first Orient Star watch was released. The name originates from a desire to create a mechanical watch that would become a “shining star” in every aspect, including design, components, and manufacturing. It features heat-treated blued steel hands, gold-plated indexes, and has a high-quality exterior showcasing the passion of the engineers at that time.

The movement, which initially started with 10 jewels, evolved into a new design with 15 jewels the following year. Thereafter, the movement was further improved and several new variations emerged. In 1957, the Orient Star Dynamic, which featured a pioneering T-type center-second movement, was released. In addition to being equipped with the latest movement, the Dynamic featured Arabic numerals, which were popular in the former Eastern Bloc, and also came in different dial designs such as the Art Deco or Avant-garde style, making the Orient Star line unique in the Japanese watch world at that time. 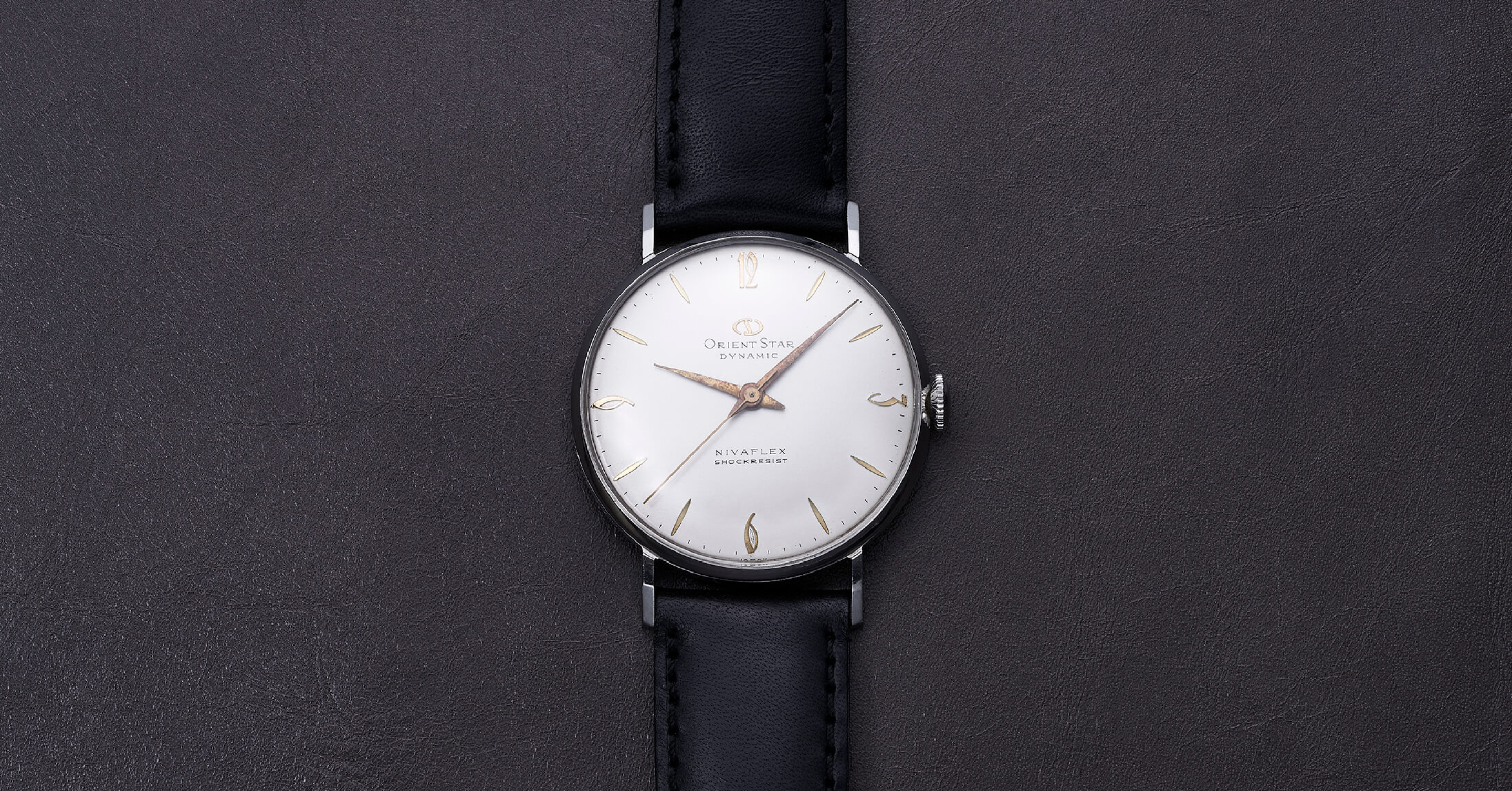 In the 1970s, the mechanical Orient Star disappeared at one point due to the shift in domestic production to quartz, but it would be revived in the 1990s. It was equipped with a mechanical 46 series, a base movement that was born in 1971. This resulted in Orient Star's revival as a full-blown, mechanical watchmaker. Orient Star introduced its first Power Reserve indicator-equipped movement in 1996, and since then it has developed a variety of collections, such as GMT and Semi Skeleton. From 1998, a skeleton, the model that would become an iconic design of the Orient Star line also appeared. Then, in 2017, the Orient Star’s first mechanical moon phase was released.

Meanwhile, that year, Orient Watch merged with Seiko Epson, a long-time collaborator, and Orient Star was reorganized as a part of Seiko Epson. With Seiko Epson's know-how and watchmaking technology to improve accuracy and aesthetics, the Orient Star line could aim to be a mechanical watch star that would shine even brighter.

Orient Watch started in 1951 at the Hino Factory of Toyo Tokei Manufacturing. The name Orient is derived from "Toyo Tokei" (Oriental Watch). In an era when the scars of defeat by war had not yet healed, Orient Watch emerged as the first watchmaker in the world to establish a belt conveyor mass production system. In 1958, with a reasonably-priced, high-performance watch, the first mechanical Orient Star was born. The main export destinations were the Middle East, South America, and China. Although it was an era when the quartz movement dominated the watch world, there were many overseas trading areas where it was difficult to obtain batteries, so Orient Watch was able to continue to manufacture mechanical watches, and further develop the technology. In 1986, Akita Orient Precision Instruments Co., Ltd (present Akita Epson) was established in Yuzawa City, Akita Prefecture. In 1988, most of the watchmaking was concentrated there. 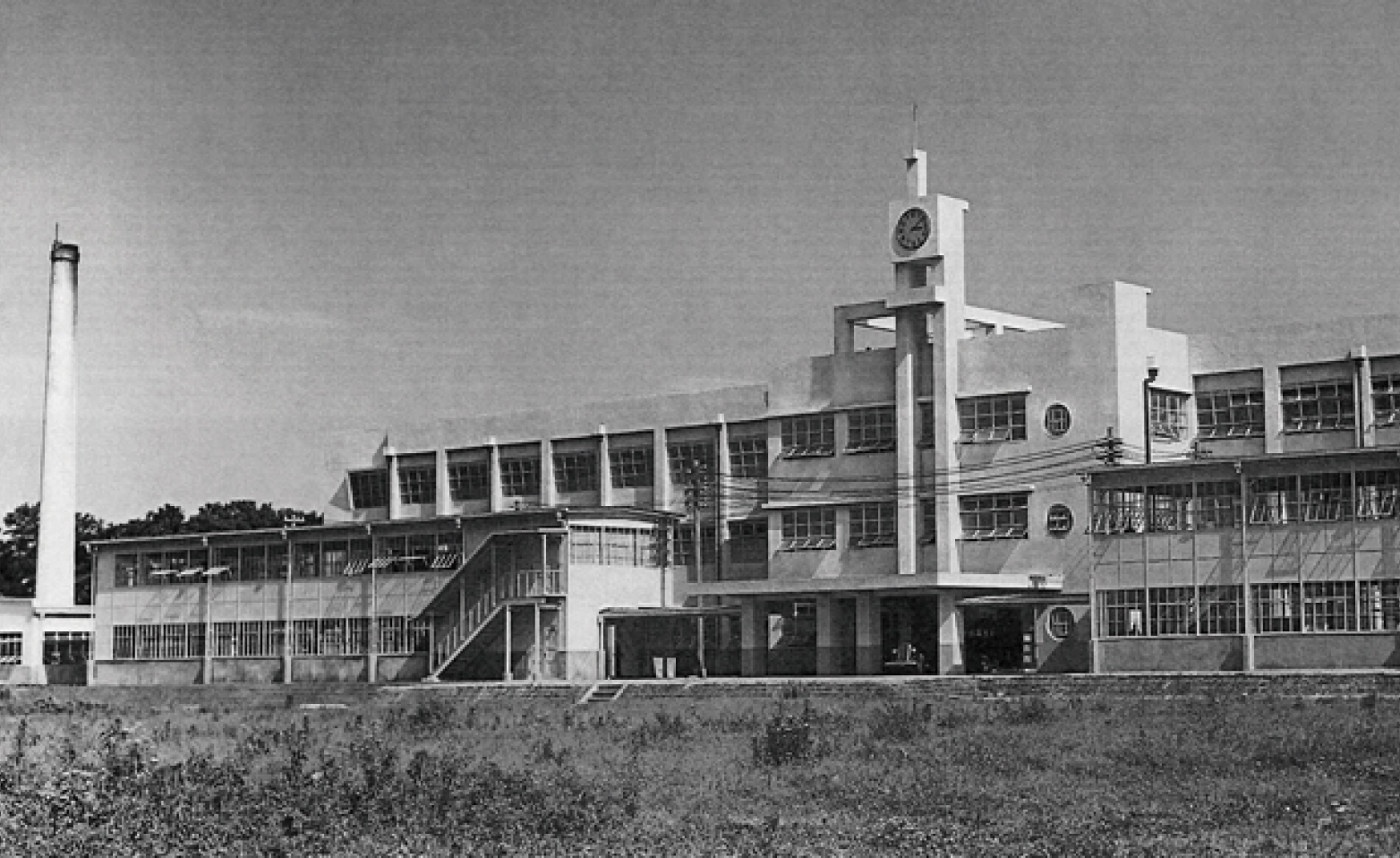 Women have played an essential role in the manufacturing of Orient Star watches ever since the beginning in Hino and after the move to Akita. This is still the case today, even after the merger with Seiko Epson. Currently, there are 64 technicians employed in movement assembly and casing at Akita Epson. Seventy percent of them are women. A female engineer is also in charge of the assembly of a new mechanical movement that applies the semiconductor technology of the Seiko Epson Fujimi Plant, which we will explain further later.

Even employees who join the company without any knowledge of mechanical movements will learn various techniques within the first six months of joining, under the guidance of their team leader. The average age of technicians is 38. The mechanical watches that the Orient Star line has cultivated over 70 years will continue into the future in the hands of these young technicians.

An original design that stimulates the senses while focusing on functionality 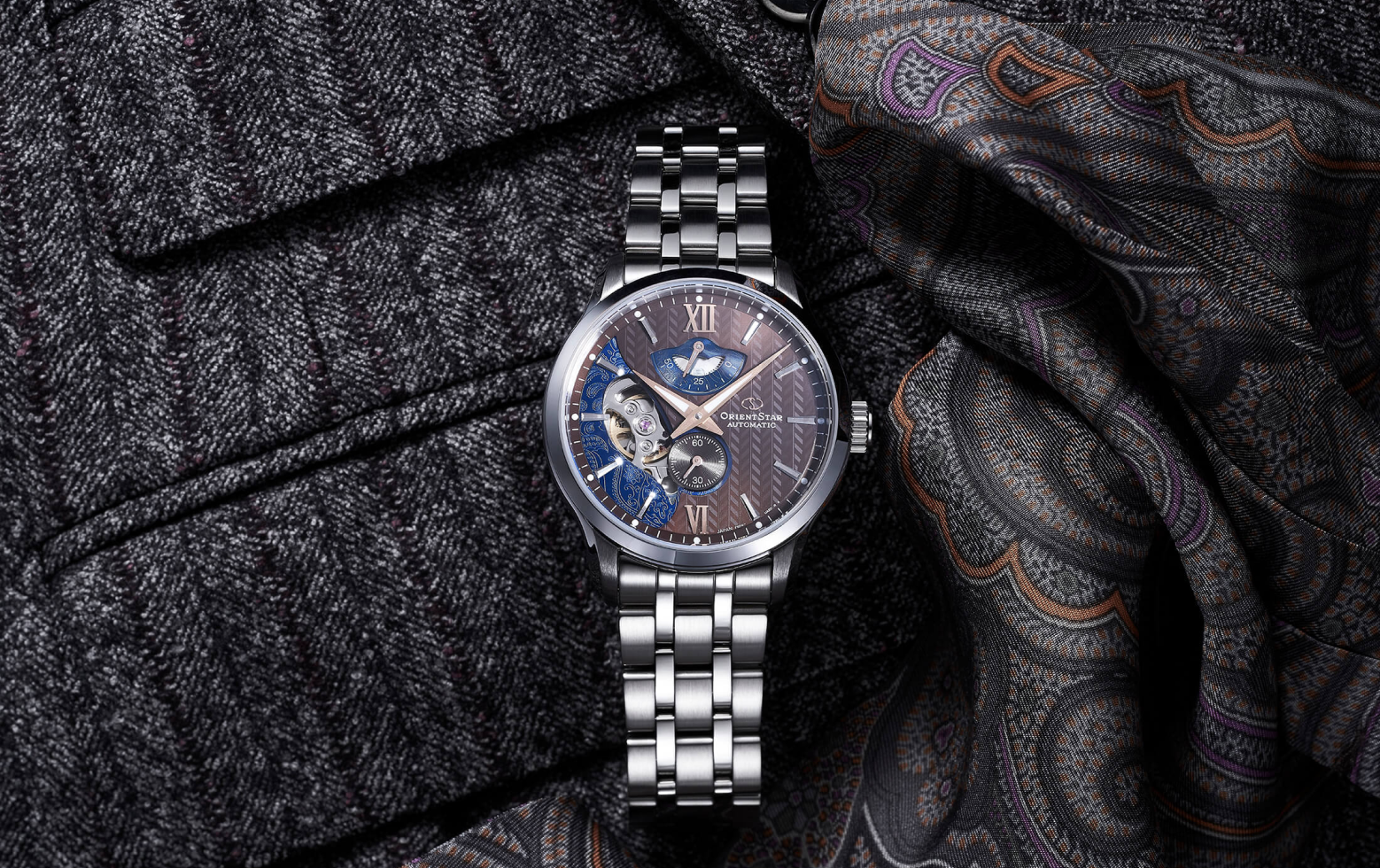 As mentioned above, Orient Watch has been trading overseas since 1958. By including design aspects from various countries, it was possible to conceive a design like the Orient Star Dynamic, which stood out from other domestic watches. Therefore, many watch enthusiasts refer to it as the "Orient Star of Design." In fact, the Orient and Orient Star line featured several uniquely designed watches, such as those with hexagonal or triangular cases or rotary dials. The Mon Bijou model, an attainable skeleton piece that would normally be priced higher, was released in 1991. The charms of the mechanical watch are visible, with the inner workings of the winding of the mainspring, the movement of the balance wheel, and the escapement wheel displayed through the dial.

Each feature of the main plate and bridge were open-worked to the very last detail, and it featured an elaborate design. The new Orient Star Skeleton has inherited DNA from the Mon Bijou model. The layered dial shows the paisley-patterned lining peeking through the herringbone jacket. The upper layer is brown, and the lower layer is navy. The meticulously polished finish of the semi-skeleton balance bridge adds to its elegance. The DNA of such a bold design is inherited by the current Orient Star line. However, as embodied by the first Orient Star model, what the Orient Star line values above all else is sincere watchmaking with an emphasis on functionality. Since 1996, the power reserve indicator has been integrated as a standard component in Orient Star watches, which is largely due to this attitude.

On the other hand, it is also a tradition of the Orient brand to constantly take on new challenges. The new Orient Star Layered Skeleton has been given a truly novel design. As the name suggests, the model features a two-layer dial divided with an organic curve. Each layer has a suit fabric motif, with a herringbone pattern on the upper layer and a paisley pattern on the lower layer. The lower layer is semi-skeletonized, showcasing the movement of the balance wheel. The uniqueness of the paisley-shaped semi-skeleton opening on the dial embodies the playful elegance of the "Orient Star of Design".

A manufacturing system cultivated by its own history

The escape wheel visible through the open work has been specially configured with a spring mechanism, and fixed with a pinion. Since being merged into Epson, the aesthetics have improved with rounder gear shafts and enhanced polishing.

The silicon escape wheel was first used in Orient Star's most emblematic model, the Skeleton. For the small second hand of the 46 series, which is a center-second movement, a special design is adopted in which the seconds pinion with a small second hand is turned by the 4th wheel. As a result, the movement of the blue silicon escape wheel is visible inside the sub-dial.

In 2017, Orient Watch Co. Ltd. merged with Seiko Epson Corporation, a company with a strong watchmaking heritage since its founding in 1942. The technology was utilized in the core 46 series mechanical movement. A development department was established at the Seiko Epson Shiojiri Plant, with an aim to improve the 46 series. The processing accuracy of each component has been improved, and the main wheel train has also been redesigned. The movement created in this way is more accurate than the original, and it is also thinner and more aesthetically pleasing.

In addition, the company, known for its printers, utilizes a microfabrication technology, MEMS (Micro Electro Mechanical Systems). The year before the merger, a project to utilize this technology in the Orient Star line began. And, in this year of its 70th anniversary, the first Orient Star model featuring a silicon escape wheel was completed. The purpose of developing the silicon escape wheel was to improve the power reserve of the 46 series. Silicon escape wheels are about one third lighter than traditional metal ones. The surface is smooth, and friction is reduced. Currently used in the Skeleton, the latest 46-F8 series movements utilizing a new silicon escape wheel, replace the previous caliber 48E51, and see a remodelled barrel with a longer power reserve of 70 hours, surpassing the 50 hours of previous models. 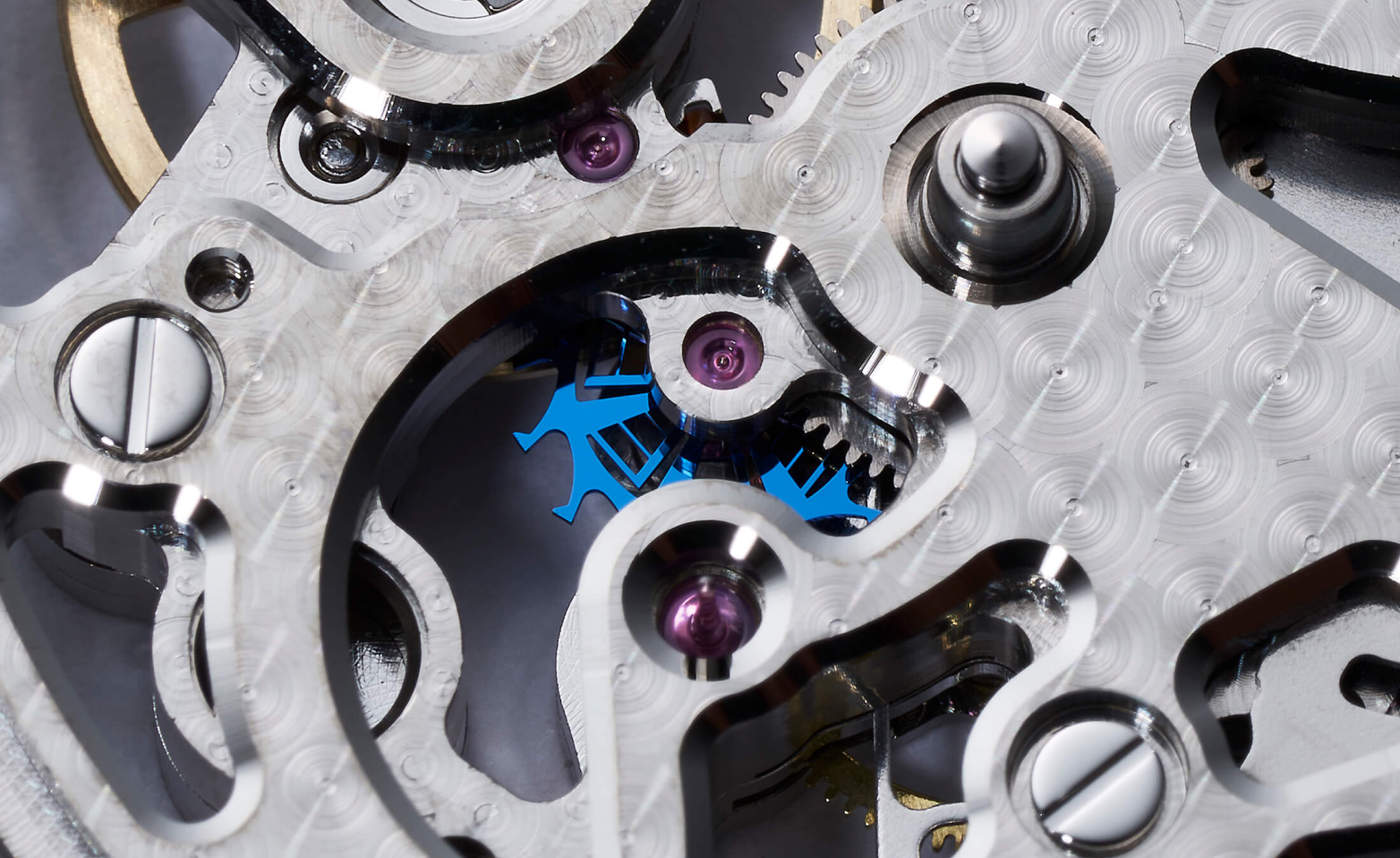 The new silicon escape wheel differs from silicon components made by Swiss watchmakers and is created utilizing the technology also used in the manufacturing process of semiconductors and print-heads. Utilizing semiconductor film technology, a structure is formed of multiple layers of polysilicon film with an amorphous (non-crystalline) structure and an oxide film with thickness controlled at the nanometer level. The result is a brilliant blue escape wheel.

The female technician responsible for the assembly of the 46 series F8 at Akita Epson, says, "as silicon escape wheels are a lot more delicate than metal, we use soft brass tweezers." In addition, a special press-fit machine for fixing the pinion to the silicon escapement wheel was developed at the Shiojiri plant.

The joining of the Orient Watch and Seiko Epson watchmakers has seen an increase in the performance of the 46 series this year, 50 years after its birth.

LEARN MORE ABOUT THE ORIENT STAR

A new-generation skeleton watch derived from 70 years of research 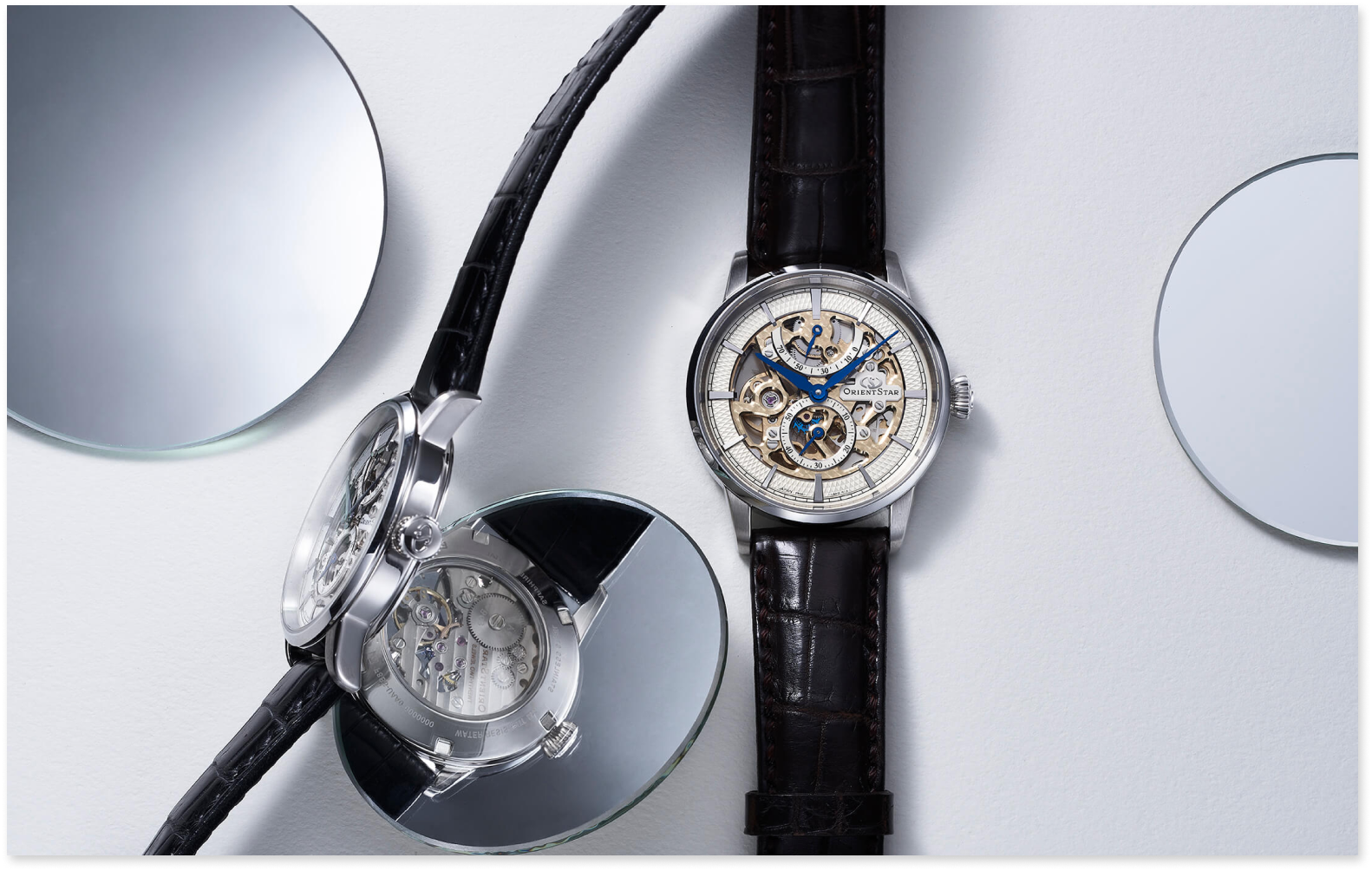 Equipped with a silicon escape wheel for the first time, the latest Orient Star Skeleton model not only offers a high level of sophisticated detail, but it is also a lot more pleasing to the eye. The open work of the mainplate, for example, features chamfered diamond components, adding an elegant sparkle and further emphasizing the Skeleton's depth. The open work has also undergone a makeover, and the bridge of the balance wheel features the shape of a comet with two tails. On top of that, the blue silicon escape wheel in the small seconds sub dial at the bottom right evokes images of the Milky Way Galaxy, with color and design that highlight the "microcosm." of the mechanical movement.

The sapphire crystal has been improved from a conventional single spherical surface to a dual-curved sapphire. This allows the wearer to view the details of the dial from all angles.

The incredibly detailed finishing on the dial side and case back of the movement have also been meticulously polished. The hand-sewn crocodile leather strap, rare in this price range, features exceptional stitching.

*Reprinted from HODINKEE.COM Edition MAY.22.2021